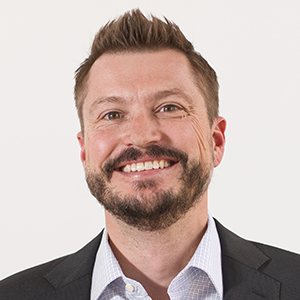 Bryce Hall is an accomplished architect and executive with more than 20 years of experience in residential architecture. As the President of KEPHART, he guides the strategic vision and direction of the firm, providing support for eight additional Principals who help drive KEPHART’s success. Bryce’s contagious passion and deep knowledge of the industry inspires his peers to pursue continuous growth and education.

Bryce attended the University of Colorado, where he earned master’s degrees in both architecture and business administration, allowing him to understand the industry more comprehensively, from the perspective of both an architect and a developer. His enthusiasm for these two interests, combined with his deep understanding of client needs throughout the duration of a project, have helped solidify KEPHART as the architect of choice for many national developers.

Bryce’s exemplary leadership has earned him recognition as one of ENR’s Top 20 Under 40 AEC Professionals in the Mountain States Region and President of one of Denver’s Best Places to Work. He also represents and shares KEPHART’s thought leadership on a national stage at events like the National Multifamily Housing Conference and the Pacific Coast Builders’ Conference.

Outside of the office, Bryce enjoys gathering his wife, two boys, and dog around the fire pit to share a tale of the old days,  a legend known as “A Life with Free Time.”

Back to team members

Looking for a cool place to work?