What Makes a Successful Transit-Oriented Development

Another team for KEPHART’s Research and Development Day 2018 was the Transit-Oriented Development group. This team team set out to explore Transit-Oriented Developments (TODs) around Denver to asses how successful we thought they were.  We explored the development directly adjacent to six light rail stops along the B-Line as well as the C/D-Lines.  We aimed to find out what design elements make a successful light rail stop and, if we deemed the station to be unsuccessful, the reasons why it was unsuccessful and what could be done to make it better.

Our assessment was generally subjective and based mostly on how the rail stop “felt” to the group.  We had a lot of ongoing discussions as we poked in and around the areas and essentially came to a general consensus in an organic manner.  Among the things we looked at were how the space was activated, amenities that were available in close proximity, and the overall look and feel of the station/surrounding area.

The newest (operational) station that we visited, Westminster Station, appeared to have the most effort and forethought put into the planning. Located off Federal Blvd between Interstate 76 and the Boulder turnpike, it’s large, open grassy areas and creek gives this station a park-like feel. A large amphitheater-esque area provides seating for people and play elements for kids with imaginations. There is a 600-space parking garage nearby and 18 racks for bikes. With an established low-density residential community to the south, the most growth potential for this station is to the north with what appears to be the ability to enhance the area further with higher-density, mixed-used developments.

While success is hard to assess due to the newness and lack of current, residential/mixed-use development, we deemed this station to be very successful – at least in concept. The thoughtfulness in planning and designing is evident. We can envision a lively atmosphere around this station, especially on the weekends when people might visit just to hang out in the grassy areas or play in the creek. Future development of the land to the north with higher-density, mixed-use buildings would really inject life into this light rail stop and make it one of the most successful stations on this list. Time will tell if this is true. 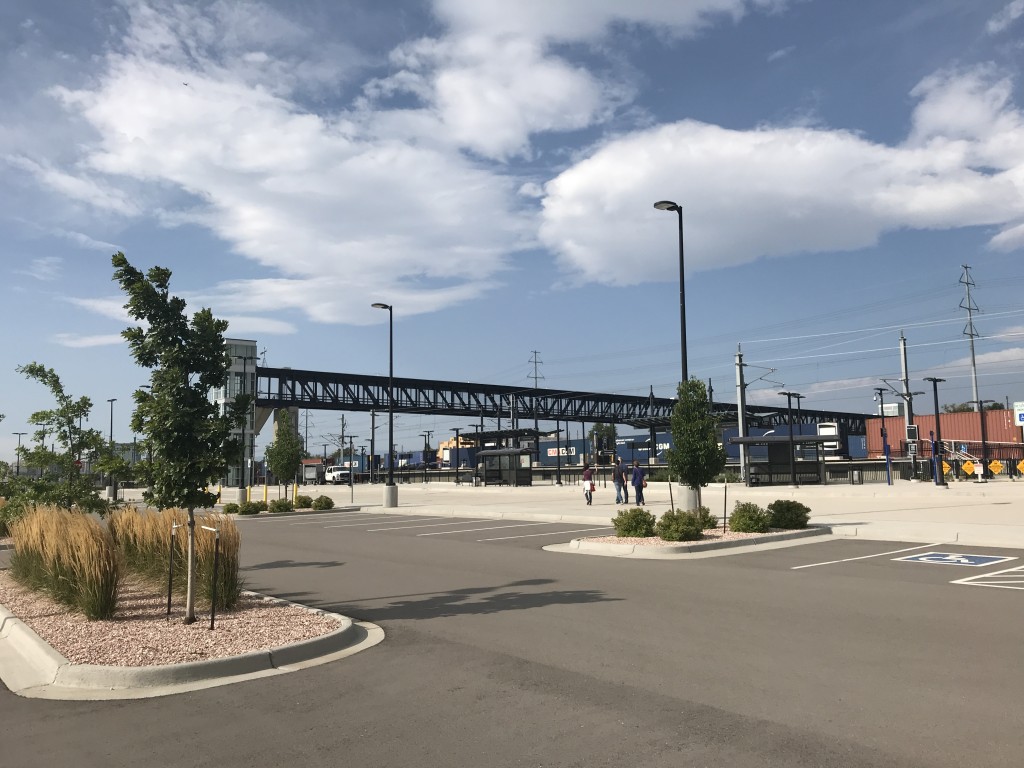 This station, located where the Sunnyside and Globeville neighborhoods collide, is directly north of Downtown Denver. It’s not currently open for use by the public. This station had a noticeably different feel than all the others on this list. It is more utilitarian in nature with only a surface parking lot as its main feature. The Heavy Rail tracks provide a hard barrier between the neighborhood to the west and the station itself. A (very) long pedestrian bridge is the only link between the up-and-coming East Sunnyside neighborhood and the light rail station.

Like the Westminster station, the success of this Light Rail stop is hard to determine. It’s so new – trains aren’t even stopping here – and there’s a lack of new residential development directly adjacent. The Heavy Rail tracks are a barrier to existing development to the west. The surrounding neighborhood to the east is primarily industrial in nature and does nothing to enhance the area. There are small, commercial/restaurant uses to the south, but they aren’t enough to provide the potential traffic to this station to currently spell success.

There is excellent potential though. The Regency Student Housing Community is a few blocks east and will certainly benefit from the opening of this station. The old Denver Post complex to the north provides a considerable amount of land that is intended to be developed into a higher-density, mixed-use neighborhood and will significantly increase the use of this rail stop. A second, important access to I-70 is planned along 46th Street which will encourage and support diverse development opportunities near this station. There is increased multi-family development to the west and the bridge connection to Sunnyside gives that neighborhood a much-needed point of access to a light rail stop. This example of the chicken or egg scenario (build it and they will come?) will play out over the next 5-10 years, and it will be interesting to see how it turns out. 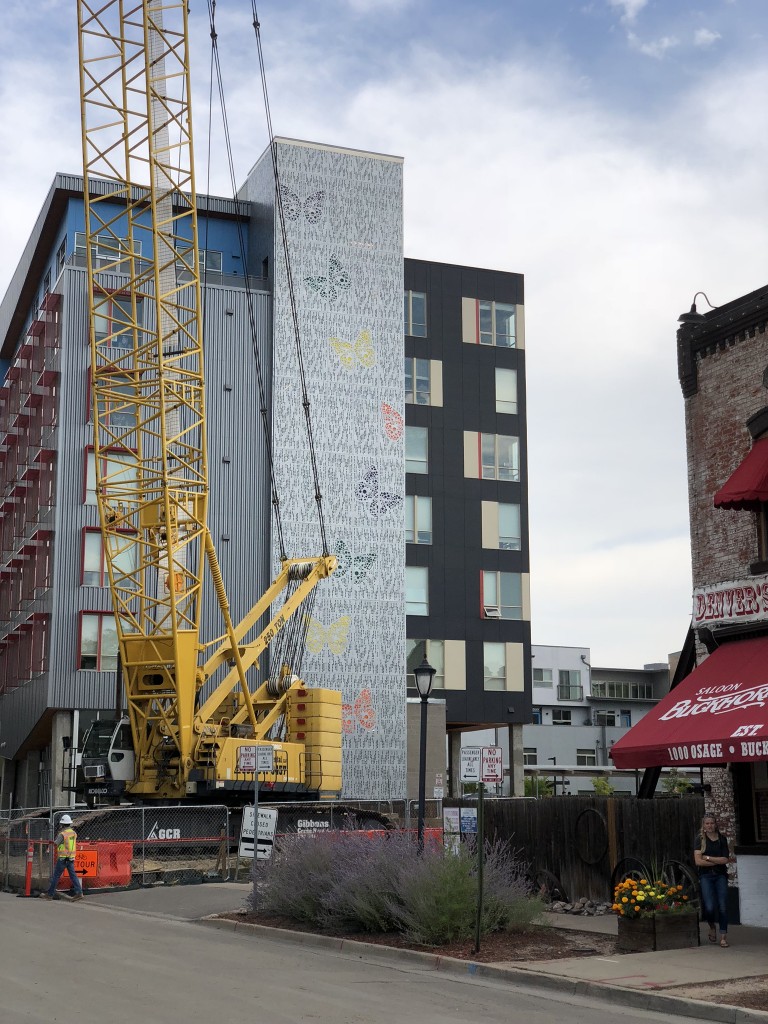 The 10th and Osage Station is anchored by one of Denver’s oldest, still-in-operation restaurants, The Buckhorn Exchange. This National Historic Landmark is famous for having the State of Colorado’s liquor license Number One. The station is also adjacent to one of Denver’s oldest neighborhoods, Lincoln Park.  The neighborhood is mostly low-density single- and multi- dwelling residences. However, over the last decade the area directly adjacent to the rail stop is being redeveloped into high density, multi-family and commercial uses. One- and two- story housing has given way to medium-density and mid-rise buildings, concentrating people into the critical mass that makes this light rail station a success story.

The successfulness of this station isn’t so much about the station itself as it is about the development that it spawned. The stop isn’t much more than a platform, a small plaza, and some bicycle racks.  What it is, however, is the catalyst of the rich influx of people and small businesses that have grown up around it.  Small shops housing cafes, bike repair, and even a grocery store provide services to the many residents that currently live there and will live there in the future.

As the 41st and Fox Station had, this station is bordered on the west by Heavy Rail. Unlike 41st and Fox, it benefits from more connections over those tracks, not to mention being in proximity to a well-establish residential neighborhood.

If there’s one thing that could be improved about the station itself, it is its underwhelming plaza. The plaza is directly in line with 10th avenue but provides no vista to the street’s terminus, save a light pole and some ticket machines. Underwhelming indeed. It is surprising that, in a district with as much history and heritage as it has, that there’s not more of a celebration going on in the Station’s only amenity. 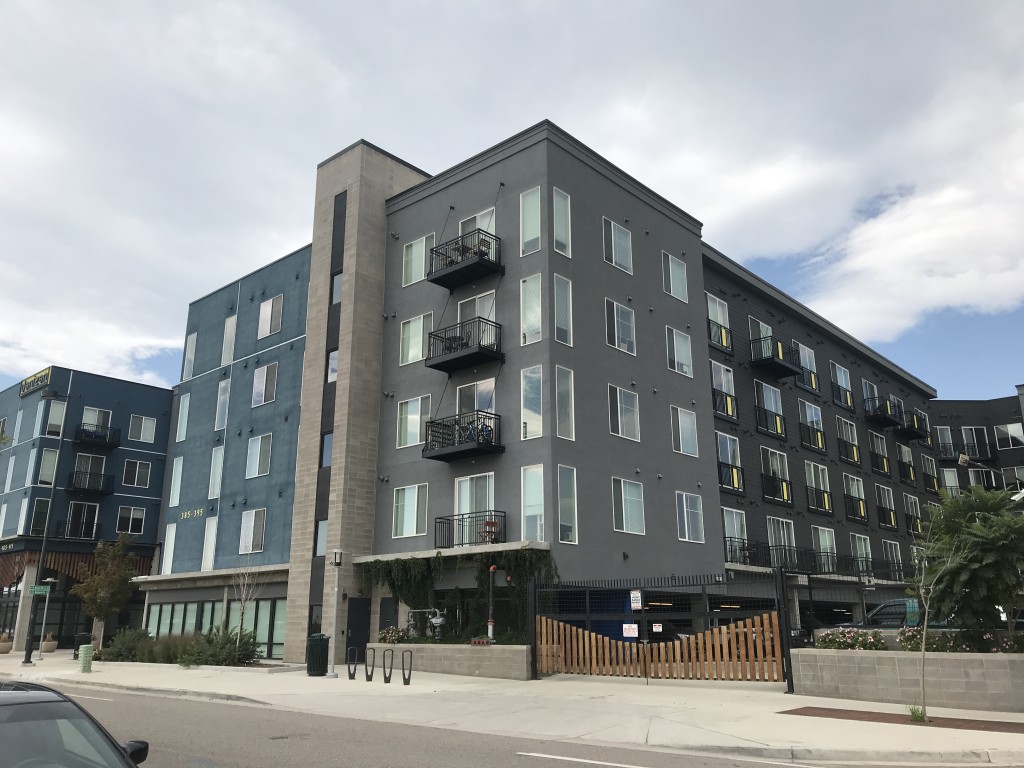 One stop south of 10th and Osage sits Alameda Station. Another long-established station, it serves as a stop on the C- D- E- F- and H- Lines. This station’s story is being written in the present day. On a former parking lot that was directly adjacent to the rail platform, there now sits a four-story, LEED Platinum, mixed-use building that is only a couple of years old (full disclosure: the building was designed by KEPHART). The commercial center to the east, formerly anchored by Kmart, is a sea of parking with nary a residential building on the premises. Lower-density neighborhoods surround the old strip center but have the busy thoroughfares of Alameda Ave and S Broadway/S Lincoln St cutting them off from being truly integrated with the station.

The Kmart site is currently being redeveloped into a mixed-use community (full disclosure #2: KEPHART is the Architect on at least one to-be-constructed building on this site). As seen at the 10th and Osage station, this will most certainly prove to be a boon for this rail stop. The success of this station will hinge on how thoughtful the planning of this redevelopment is, but the future looks bright indeed. 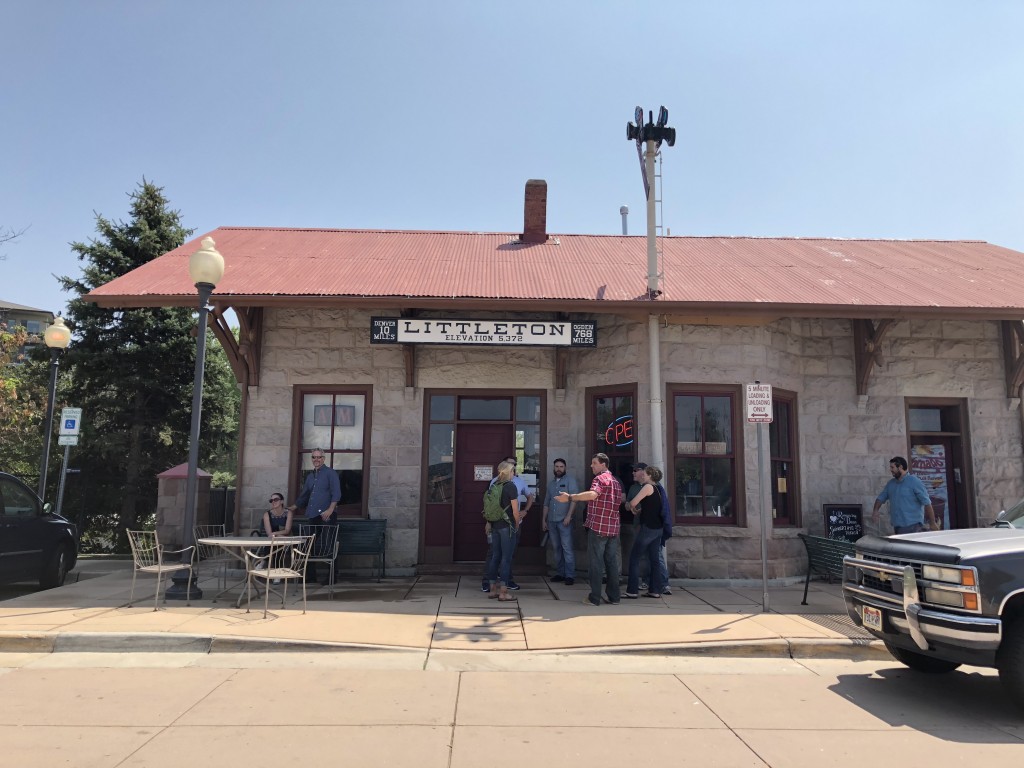 Like the 10th and Osage station, the Littleton-Downtown station has a historical background. The National Historic Landmark, Depot Building, located at the station originally served as a flag stop for the Denver and Rio Grande railroad in 1871. This line was built to serve the resort community that had just been founded, Colorado Springs (credit). The station’s platform sits down in a trench along with the Heavy Rail tracks to the east. While the design of the ramp and stairs up to grade are thoughtful, it is a less-than-desirable arrival experience.

The big disappointment about this station is the parking lot that you arrive at when coming up from the platform. There’s the beautiful, historic Depot building surrounded by a sea of cars. A token grassy area hosts what looks like a mock-up of a clock tower to be built. Unfortunately, it is not a mock-up. It’s woefully undersized even for the paltry amount of grass in which it is planted.

The station is totally cut off from downtown Littleton by the parking lot. We felt like there could be so much more to this than what is presented. Like the Westminster station, the current parking lot could be transformed into a destination for folks not even going to use the light rail. By extending Bega Park bordering to the north, a vibrant activity center could be created that would serve as a respite to a day of exploring Littleton’s quaint downtown. Further, it would give a spot and allow more of a celebration for the historic Depot building which, “is one of only a few remaining examples of the 19th century style of small, stone depots. (credit).

At first glance, Englewood Station has all the makings for a successful TOD stop. There’s a large, open grassy area featuring a water fountain and splash area for children. Englewood Civic Center is there including The Museum of Outdoor Arts. Numerous mixed-used, multi-family developments surround the grassy space. There’s even a stage-like area for productions or concerts.

Despite all this, we felt that this station was not successful. Most, if not all, of the commercial spaces surrounding the green space lay empty, giving the area almost a ghost town-like feel. Because of this, the space is not active. Granted, we were there on a Thursday morning. One possible cause that someone in the group proposed was the fact that Walmart built their superstore/parking lot spanning Englewood Parkway. This artery was supposed to be a link between Broadway and the Civic Center. The interruption of the thoroughfare may have been the death knell for growth and vitality of the station’s namesake park.

What makes a successful TOD stop?  Through our admittedly unscientific analysis it seems to be people, for the most part. Stations that we deemed successful were supported by high concentrations of people – or the potential for higher-density/mixed uses to be developed – around them. However, in one case (Englewood Station) that didn’t prove to be true. Perhaps it’s also connection that makes the successful stations so different from the unsuccessful ones. Interruption to connections with neighborhoods, with lively downtowns, to the general flow of traffic seemed to make the unsuccessful stations less desirable.

Whatever the case is and whatever one’s criteria for determining whether a station is successful or not, thoughtful design and planning is key to how successful the station is – design of both the station itself and the area surrounding it.